Legends of Sanibel’s Pirate Past 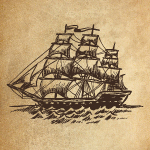 Florida is said to have more sunken treasure than anywhere else in the world. Conflicting accounts of pirate legends are surrounded in mystery, leaving many unanswered questions and speculations about our state’s pirate past, particularly in Sanibel. Sanibel’s pirate tales are richer than the island’s crystal sand. The area including Sanibel and the surrounding barrier islands that run East-to-West was even nicknamed the “Buccaneer Coast”, as it was a perfect playground for pesky pirates. Since the pirate tales of Sanibel are just that – tales – choose what you believe, but know that there was definitely adventure in Sanibel’s past…

The Reign of Pirates Begins

Henri Caesar, known as “Black Caesar,” turned to piracy in 1805, during the slave revolt in Haiti. After high-jacking a ship, Caesar and a squad of savaged slaves began raiding trade ships on the Spanish Main.  After the war in 1812, British warships began patrolling the waters close to Cuba and the Bahamas. Caesar was forced to push his pirate pack north to the Gulf of Mexico. Some historians say Caesar has between two-and-six million dollars of treasure stashed on Pine Island.

While in Florida, Caesar palled up with Jose Gaspar, better known as “Gasparilla.” Gaspar was a rebel from an aristocratic upbringing. At the age of 12, he kidnapped a young girl for ransom. He was given two choices:  jail or sail with the Royal Spanish Navy. He chose the sea. After being accused of stealing royal crown jewels by his jilted lover, the daughter of the King, he fled to Spain for good.

In 1783, Gaspar became commander of the “Floridablanca” and vowed to attack any ship flying a Spanish flag. During his 38-year rampage, he attacked and plundered over 400 ships. But revenge on Spain was not the only item on Gaspar’s agenda. He also abducted many women and kept them as his personal concubines. The captured women were held at the “Isle de los Captivas,” or Captiva Island, which is said to be how the island got its name.

In 1817, Caesar and Gaspar became enemies after Caesar stole some of Gaspar’s female prisoners for himself. Out of revenge, Gaspar raided Caesar’s camp in Sanibel, driving away from Florida’s Gulf Coast and toward the East Coast. It is believed that the majority of Caesar’s treasure got abandoned during his departure. No records remain of Caesar’s capture or death. It is a local mystery.

Gaspar’s reign of terror ceased in 1891 after an attack on a British ship didn’t go as planned. The seemingly unsuspecting ship was actually a heavily armed American Naval warship known as the USS Enterprise. Gaspar had met his match and his ship sailed the sea for the last time that day. Rather than face imprisonment, the pirate braided his body in chains and dove to his death.

What Happened to the Treasure?

I’m sure you’re wondering what happened to the treasure inside Gaspar’s sunken ship… Some believe that members of his group escaped with it after it accidently got left on the shores of Sanibel the day Gaspar died. Supposedly, the survivors escaped in a long boat up the Peace River to Spanish Homestead, where they bribed a property owner to keep them hidden. No one knows if that is really what happened, but almost $300,000 in gold coins was found near Spanish Homestead. In addition, artifacts and skeletons have been discovered in and around Pine Island Sound and San Carlos Bay. Legends say that traces of pirate treasure still remain along Florida’s shoreline and coastal waters today.

If you’re ready for an adventure of your own, Port Sanibel Marina has many different options available for exploring the waterways of the Sanibel Island area. You can take a guided eco tour in a kayak or rent a boat and explore on your own. Contact us today and start your hunt for treasure!