Way Back When: The History of Sanibel

Home » News » Way Back When: The History of Sanibel 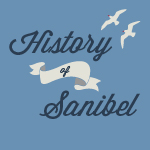 If you want to be able to appreciate all that Sanibel has to offer, you’ll need to know its story. Join us as we take a look back at some of the most important events of the area’s history and how they each played a part in making Sanibel what it is today.

The first known inhabitants of Sanibel Island were the Calusa Indians. The Calusa combed through the waters around Sanibel for conchs, clams, oysters and the like for food. They put the leftover shells to work as tools for the tribe. The Calusa held control of the island until the Spanish came into the picture in 1513 when Ponce De Leon claimed Florida for Spain. At this time, he was in search of the Fountain of Youth, and instead ended up discovering the Gulf Stream.

With the arrival of the Spaniards came diseases like yellow fever, tuberculosis and the measles, which were foreign to the tribes on Sanibel. These diseases would bring the Calusa close to extinction by the 1700s. Around this time is when pirates began using the islands around Sanibel as refuge, making it a unsafe place for traders and natives alike.

The 1800s: Bringing People and Light to Sanibel

By the early 1800s, Cuban fishing camps were predominant around both Sanibel and Captiva.  The fisherman caught trout, drum, mullet and pompano in the waters surrounding the islands. By 1832, the Florida Peninsular Land Company founded a small colony on Sanibel. Florida was admitted into the Union soon after as the 27th state in 1845. Following the Civil War, the government was able to send troops to the Sanibel area and secure the islands, making it safe for settlers. Pioneers mainly settled near Point Ybel, an area now referred to as “Old Town Sanibel.”

By 1870, the federal government decided that Sanibel would become a lighthouse reservation. Fourteen years later, the Sanibel lighthouse was activated. The lighthouse is still operational and maintained by the U.S. Coast Guard.

The 1900s: Change Met With Conservation

Sanibel and Captiva also served as a lucrative landscape for agriculture during the early parts of the 20th century, producing melons, citrus, peppers, avocado, eggplant and tomatoes. However, two major hurricanes struck the area in 1921 and 1926, splitting the island of Sanibel in two and wiping out the agriculture industry in the process.

Two years later, the Kinzie brothers built docks at the east end of Sanibel, providing a ferry service that transported people to the island for 35 years.

A very important stepping stone in Sanibel-Captiva’s history occurred in 1935, when Jay Norwood “Ding” Darling first came to Sanibel. Darling was a Pulitzer Prize-winning cartoonist who spent his winters on Sanibel Island. He was also a conservationist and played an enormous role in speaking out for protecting the islands. Thanks to his efforts and those of others, there are now six thousand acres on Sanibel that are held in the public trust as of 1945. In his honor, the refuge was named the J.N. “Ding” Darling National Wildlife Refuge.

Soon after the controversial Sanibel Causeway was built in 1963 to connect Sanibel to the mainland of Florida, Sanibel decided it was time to form its own city government in an attempt to protect the island. In 1974, the city government was formed, and land use restrictions were enacted to guide the development and growth of the island.

Today: A Beautiful Escape from a Busy World

The Sanibel-Captiva area has managed to remain a stunning, thriving barrier island that still provides a taste of the “Old Florida,” easy-going pace and natural gulf coast beauty.  Come experience Sanibel for yourself – breathe in the salty air, enjoy the ocean breezes, and see the sunset reflected on the water. Don’t have a boat? No problem, we can help. Port Sanibel Marina has a variety of boats available for rent for a half day, full day or even a week if the islands lure you in to stick around. If you’re looking for a more active alternative, you can also rent kayaks and canoes at the marina. Whatever experience you choose, enjoy it!